Can An Anesthesia Ventilator Replace a Dedicated Ventilator?

As an Air compressor ICU Ventilator Exporter, share with you. 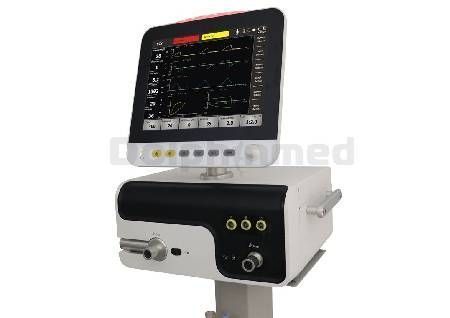 The humidifier is a more obvious mark of the ventilator, and the pipe consumables are also different. Due to the short duration of most operations, most anesthesia machines are not equipped with a humidifier, but instead use artificial nose moisturizing. The humidifier is generally placed between the inhalation valve and the patient. The exhaled gas is condensed and stored in the water cup on the expiratory line. The carbon dioxide absorbent is located upstream of the humidifier, and only passes through soda lime during inhalation, so the humidifier does not Will cause greater loss of absorbent.

The ventilator is an open circuit, all exhaled air is excreted; the anesthesia machine is a semi-closed circuit, some of the gas will be reabsorbed, the lower reading of the bellows is the amount of reinhaled gas (in fact, the exhaled air is mixed with fresh air) ). Since the carbon dioxide in the heavy inhalation gas will be absorbed by soda lime, it is recommended to increase the flow of fresh air to reduce the heavy inhalation gas in actual use, thereby reducing the rate of soda lime consumption. It is speculated that the use of an anesthesia machine may save oxygen more than a ventilator.

Our company also has an ICU Ventilator on sale, welcome to contact us.

Previous: What Should I do if the Ventilator Mask Leaks?

Next: Does Poor Sleep Cause Weight Gain?

​As an Air Compressor ICU Ventilator Exporter, share it with you.